The fall and winter has been busy for Puddingstone members, each doing wonderful things within the community. Here’s an update on one of their activities: 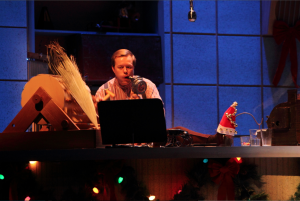 Kevin G. Anderson had the pleasure of playing the foley artist in “It’s A Wonderful Life: A Live Radio Play,” produced by the Human Race Theatre Company and presented at the Victoria Theatre by the Broadway on Main series Dec. 3-15, 2013.

Kevin, having performed on stages across America, always points to the Vic as his favorite. He loves the great house crew, the beautiful architecture, seating that allows the performers to feel connected to the audience and an always responsive hometown crowd.

For this production, Kevin chose the name of Fred Nitney for his character. Those familiar with the 1930-50s radio drama “Fibber McGee and Molly” may recognize the name, often evoked by Fibber as he waxes on about his glory days in vaudeville alongside dear pal Fred Nitney. (We’re also particularly fond of the recurring joke about the “HC.” Click the link above a hear for yourself.) Kevin also took this name for his character in the 1903 and 1904 vaudeville shows produced by Rhythm in Shoes under the big tent at Carillon Park during Dayton’s Inventing Flight celebration (2003-04). 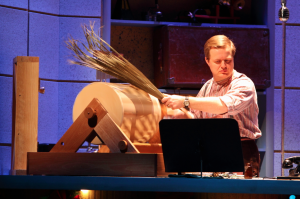 Kevin’s work on stage for “It’s a Wonderful Life” augmented the actions of each character. Clarence the Angel splashes into the river with the help of a plunger and tub full of water; Harry Bailey breaks through the ice as Kevin chomps on celery; and a “nobody” George Bailey enters his home only to find it deserted and full of bats (cue umbrella fluttering and audience members jumping in their seats). Kevin worked with director Joe Deer and the actors to develop signature sounds for each character and action, from the sexy high-heel clip-clop of Violet Bick (played by the versatile Susan J. Jacks) to the scuff-hop-bump of a clumsy Harry Bailey (played by Mark Chmiel, who never missed a beat or a laugh).

It was great for Kevin to get to work again with Dayton-area native and NYC actor Todd Lawson. Kevin worked with Todd two summers ago in the Human Race new musical workshop of Todd’s “Red-Blooded All-American Man,” in which Kevin played drummer Frat. In this December’s play, Lawson led the action as George Bailey, who runs through snow (cue cornflakes) in his search for his missing life.

Other sound effects include rattling chains and keys (as Mary, played by Betsy DiLellio, closes up the library), toppled trashcans (kicked by a drunken Uncle Billy, played by Scott Stoney), crunching snow (cornstarch box), broken glass (bottle on wind chimes), creaking screen door (violin) and so much more. Kevin stayed true to the practices of foley artists of the 1940s, researching classic sound effect tactics. He even, based on a 1940s video, built a wind machine that simulated the winter gale that assaults a distraught George Bailey.

He thanks the entire cast, including maestro Scot Woolley (“Skitch Miller”) and the Millertones jazz quartet (Sean Richard Jones, Cassi Mikat, Zack Steele and Amy Wheeler, all students from Wright State University). It was a great run with a great group of talented folks. Hope they get to do it all again.

Links to reviews, stories and video promos of the show: