The week of workshopping is over, and we made it all the way through page 28 of the script (there are 32 pages, so we’re nearly there!).

It was a week of creation and collaboration. When the choreographer was wondering where to put the Easter Bunny, Mally suggested he hide behind fat Santa (“All kids love Santas and butts!”). Molly suggested the staffs from the fight scene be used to construct a jail cell. And we all had the simultaneous realization that the chase scene should be constructed a la silent movie.

We’ll be sharing posts, photos and videos in the weeks ahead, and here’s a start: the Anderblood Girls Suite. This tune was written by Bill Anderson Jr., a fiddle player in the wonderful contra dance band Dot Dot Dash. Its three movements are dedicated to the three girls in his life: wife Christine and daughters Rebecca and Gwendolyn. In “Christine,” the audience meets the faeries, who flit about the stage and join together in a ring during “Rebecca.” In “Gwendolyn” (written when she was but a crying infant), the faeries begin their battle with the Shadows and Doubts. Oh, the wailing and fussing and fighting! Our musical, “The Captain of the Chocolate Cake,” is a story with a twist on the classic good guy v. bad guy tale — but with a very danceable soundtrack. We dare you to still still or to stop whistling the tune. And we hope you like it. (Taylor Ramos is on fiddle, Kevin G. Anderson on drums. Choreography by Beth Wright. Also shown are dancers Hazel Black and Mally Reber.) 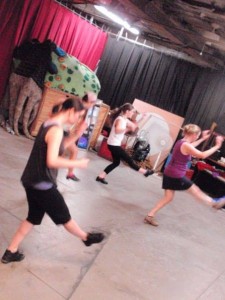 The Captain of the Chocolate Cake cannot sit still in school. The Easter Bunny has been gagged. And Santa Claus can lay down a mean tap dance.

We have completed day two of workshopping “The Captain of the Chocolate Cake, and Other Adventures” but only begun the fun. This project, started so many years ago, now has legs and feet and heads and voices, all of which are contributing to our creative process. We are combining movement with the written word and the music. It’s very cool that we have people who can be involved in multiple sides of the process, from dancing and acting to dancing and playing music to dancing and bringing doughnuts (mmmmmmm, doughnuts).

Day One included the faery dance. It began as a riotous tap piece, with faeries turning and swirling in a percussive spiral. Choreographer Beth Wright then asked the faeries to take off their taps — and the piece sprouted wings and flew effortlessly across the stage. How wonderful to see it transform into something completely different and completely perfect. 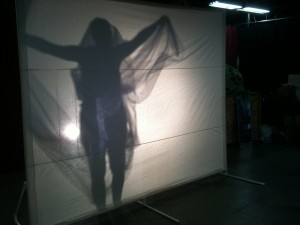 We also played with the doubt puppets. First, we backlit them and projected their ghoulish shadows onto a screen. Creepy. Then we took the tulle that embodies the doubts and wrapped a dancer. Scary! Next, the dancers held hands with the doubts and created a circle reminiscent of the Scottish sword dances that were such crowd-pleasers at Rhythm in Shoes shows. Awesome!!

Day Two started with fight training. Thanks to Allen Wright for leading us through the movements, much akin to dancing, except with wooden staffs extending the limbs of the dancers and helping beat out the rhythm of the battle. Skylar and Sam (Molly Gilbert and Hazel Black) battle wills more than bodies, developing a trust on which they will rely in later clashes.

After lunch, we brought forth “Lochness Monster” (see the clip above) and incorporated dialogue into song form. Mally Reber morphed “I forgot my homework” into “the dog ate my homework,” neither of which pleased Katrina Kittle, who plays a mean (and we mean mean) teacher. (Don’t worry, her soft side also shows as the faery queen.)

Among those in the workshop is Taylor Ramos, who gets to dance, fiddle and act. “I think it’s just a fun process, getting a bunch of ideas in there and experimenting with the process,” she said.

We hope you’re enjoying the updates, and we hope you’ll want to see the show when we mount it later this year. Email us and ask to be added to our mailing list to receive updates.

Until then, remember: “Dragons? Real. Phantoms? They’re real.” All of them can be true. 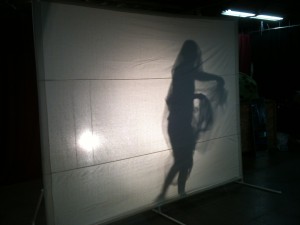