Like the rock from which it takes its name, Puddingstone Project is a conglomeration of artists with varied talents. Keep watching this page for new additions. 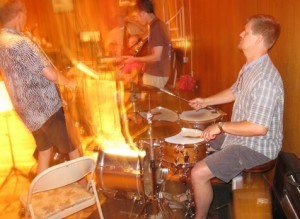 Kevin G. Anderson is a composer and multi-instrumentalist who has enjoyed playing for dance for 20 years. He helped conceptualize the Puddingstone Project as a way to bring artists of many talents together to entertain audiences and share love for music, dance and theater. Kevin joined the traditional music and dance company Rhythm in Shoes in 1999 and performed with them through their final season in 2010. A native of Dayton, Ohio, and graduate of the University of Dayton geology department, Kevin has combined rocks and rolls while playing percussion in a variety of bands. His work includes accompaniment and composition for the Dayton Contemporary Dance Company, Stivers School for the Arts and Wright State University, among others. Kevin’s compositions include “Phases,” premiered by DCDC in 1999, “Shades of Possession,” set in 2004 for the Wright State University Dance Ensemble, and “Strive,” premiered by the Apex Dance Theatre in 2009. As an artist, he seeks to enhance the aural and the visual through melding of music and movement in performance, composition and education. 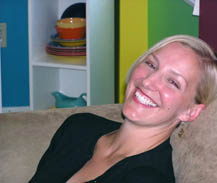 Katrina Kittle is the author of Traveling Light, Two Truths and a Lie, and The Kindness of Strangers, and The Blessings of the Animals, published by Harper Collins. A longtime resident of Dayton, Ohio, she attended Ohio University and earned an MFA in Creative Writing from Spalding University in Louisville. She taught high school English and middle school English and theatre  and had also worked as a house cleaner, a veterinary assistant, a children’s theater director, a costumer, and as case management support for the AIDS Resource Center. The Kindness of Strangers was a BookSense pick and the winner of the 2006 Great Lakes Book Award for Fiction. Early chapters from that novel earned her grants from both the Ohio Arts Council and Culture Works. The Blessings of the Animals was an Indie Next pick (August 2010), a Midwest Connections pick (September 2010), and chosen by the Women’s National Book Association as one of ten Great Group Reads for National Book Group Month (October 2010). Her first young adult novel, Reasons to Be Happy, will be published by Sourcebooks Jabberwocky in Fall 2011. 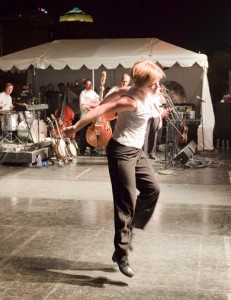 Beth Wright is a dancer, choreographer and educator of dance. She has been sharing her art form with others professionally since the age of 15. For nine seasons she was a member of Dayton, Ohio, favorite Rhythm In Shoes, a company rooted in traditional forms of American music and dance — swing tunes and tap, hoedowns and clogging. Beth enjoyed performing for audiences and teaching young dancers through senior citizens nationwide. Beth worked through the Muse Machine performing for and teaching dance to elementary and secondary students throughout the Dayton area. Beth has also served as adjunct faculty at Stivers School for the Arts and Colonel White High School for the Performing Arts in Dayton. Most recently, she taught at the Civic Light Opera Academy in Pittsburgh, Penn. Beth teaches tap, ballet, creative movement, jazz, swing and modern dance. Her choreography has been seen in the 2005 production of the Johnny Appleseed Outdoor Drama in Ashland, Ohio, in the Rhythm In Shoes repertoire, and in many high school show choirs and musicals.

Malkum Gibson is one of today’s truly great blues men. Mr. B. B. King said of him, “This guy is marvelous. He has a rare talent.” Mr. King produced and published Malkum’s songs for the album JUST THE BLUES on the Bluestime record label. Malkum has played with today’s top talent from Taj Mahal and Buddy Guy to Guy Davis and the late great BooZoo Chavis. Be it acoustic or electrifying blues, one thing is for sure; the house will rock all night long! “Harp, guitar, broken hearts and cheating lovers…” is how Texas Blues Magazine describes Malkum’s style of blues. Walla Walla, Washington’s Blues News says, “Malkum is one of today’s best harp players whose lyrical phrasing and unique style set him apart from the pack.” From Spain to Ireland, across the USA and Canada, from Dirty Linen to Sing Out!, one thing rings clear — music inspired by tradition and that tradition is the BLUES!